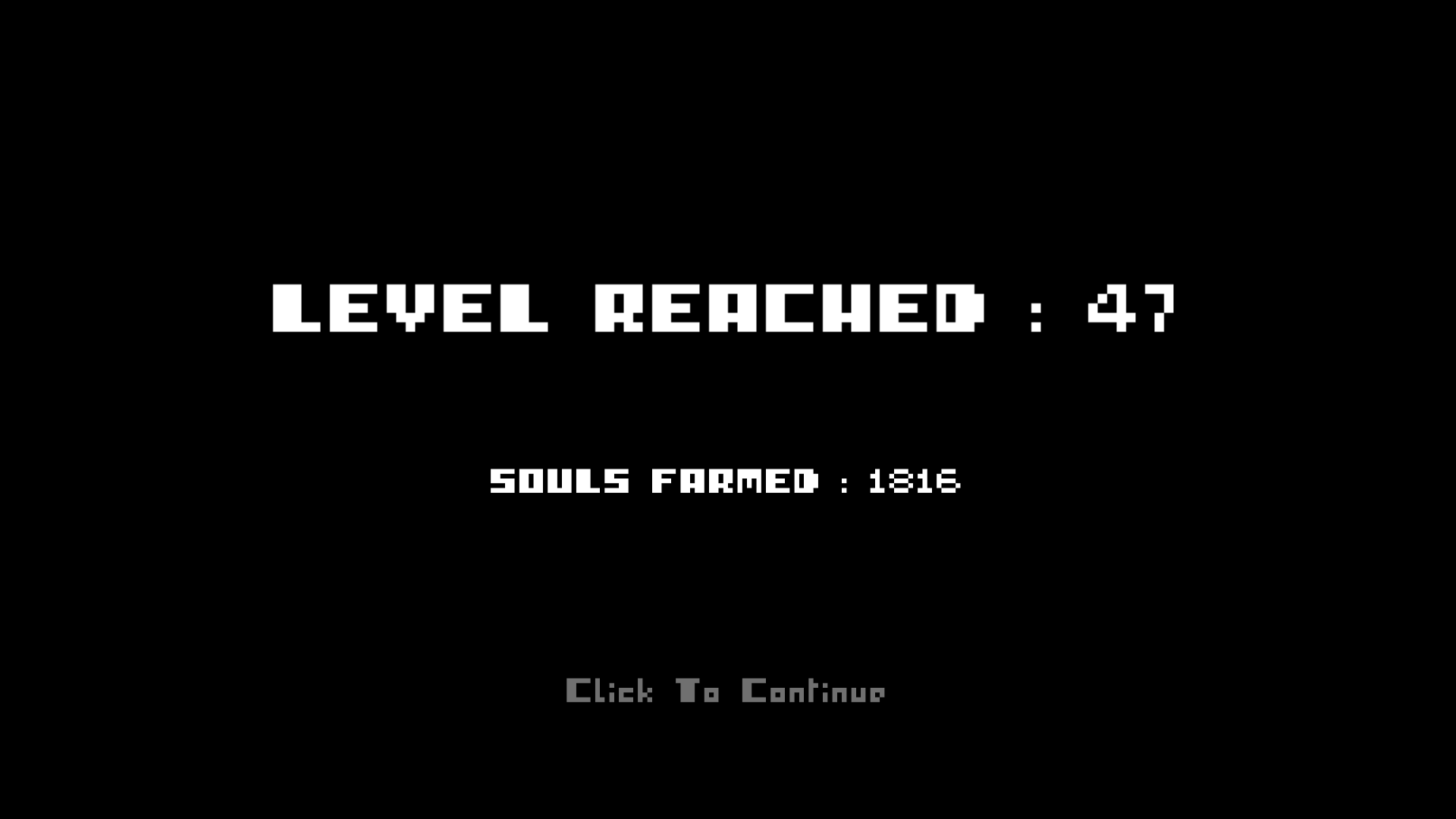 Interesting concept! Amazing gameplay! Nice graphics and music/sound!! 5 out of 5.

Great game, the combat is really juicy and satisfying. I like all three kinds of plants as well as the watering can mechanic.

Awesome game! I love it!!! Feels like the creepy and challenging version of these default farming games.  I reached lvl 130! Is there an end or is it endless?

The game is, happily, endless and has infinite replay ability, but it has no save mechanic

I think this is a very cool concept, I hope you develop this game further!

omg this is amazing. My only complaint would be the control placement but it might just be my keyboard! gosh this game is awesome, what a great concept! smooth, responsive, good graphics, neat music, cool enemies... i really really hope you keep going with it! it has tons of potential eheh

great game and i love all the things you do keep it up dude!

Looks cool! Has lots of potential

What does engine was this game made with?

great game when will it be downloadable?

That's what I call a top-notch Ludum Dare 41 entry: The visuals are wonderful and even though the gameplay is based on the grinding, it doesn't feel too repetitive, because the players themselves are responsible for their hostile environment. I could perfectly imagine an expanded version of this game featuring more gameplay mechanics of "Harvest Moon", like a little hen house, where chicken hatch their eggs and when one doesn't collect them fast enough, they'll evolve in monster fledglings or something like that. :D Anyway, that was incredibly much fun, so I simply had to recommend this game in a little article on our blog and also to upload a gameplay video of it. <3 Good luck with the ratings!

This is really incredible.

Awesome! It's really addictive to plant and kill =) I gave birth to you and I'll kill you, bugaga! =)

this game is really fun, I played until lvl 130? (over 100 is impossible to understand exactly what level I am), by planning in advance I was able in the first run to go this far and I could go even further, as other said it would be really nice if there was a mid boss and maybe other maps

this game is amazing. this is my first time playing this game so the dev can watch it for future update.

the best dark souls game ever of course no doubt

everything is polished in my eyes, the monster is cute and dangerous

-maybe watering can upgrade so it could water farther soils

-add mini boss, it will be funny :D

Make a garden game. planting plants will give you xp and new tools, plants try to kill you.

This game is absolutely AMAZING!

I really love this game, and i hope it's gonna be released in the future! ^_^

Ps. I tried to tag your team on instagram,but i couldnt find you guys

Anyways, I would love to share some ideas/suggestions i've come up with:

-Move the level thing on top right corner, cause sometimes you cant see stuff spawning behind it, when u are in that part of the map;

-Allow players to drop seeds from a little distance (So we dont have to go melee, in a bunch of mobs);

-Water bombs, so when the map is crowded af, and you really can't get close to a crop, at least you can water it from a distance;

- (As another person suggested before me) An encyclopedia with monsters/plants/weapons infos;

-Timed/ Limited boosts achieved through some subquests/goals (such as damage increased/the water bombs i mentioned above/invulnerability);

Thank you for creating such an amazing game!

Thank you so much for the detailled review and the suggestions, we'll publish a postjam update right after the Ludum Dare is over, we plan to add a few things but the goal  is to tweak the game balancing. But maybe in a near future, we'll work on an even bigger full version :)

I love your game guys ! It's a fucking good job !

Thank you so much !

I think this game could be very fun if expanded upon. monster crossbreeding, an encyclopedia and some upgrades and minions would make it awesome

Thanks, those are great ideas, Well it isn't planned to expand it further right now but I would love to do that, we'll have to discuss about it with the team, but I also have plenty mechanics that I would love to make it a real roguelike game.

I'M FROM THE FUTURE