OVERGAME is a breaking-the-4th-wall story-rich and funny meta game with a plot twist.

the most adaptative experience ever made,

unique to each player,

designed live with the gamedevs.

oh come on you don't know who h20delirous is?

Great game it's hard but possible the music is great too I don't want to spoil the whole thing but once you beat the hard levels something fun happens :). One thing that can improve is the controls jumping should be space because it makes it a whole lot easier but then again the game being hard is the fun part.

OK HOW DO I DEFEAT BOSS IN DARK SOULS

Well he says "i need love" so use the hearts duh.

no just the hearts at him

great game but no minecraft

What happens if you give the Animal Crossing NPC 1000 fish?

I don't think anyone has tried that.

I shall be the first, then.

Do you know now ?

i was kinda joking, but i'm honestly considering it

haha please don't do it for now, some people did it but there is nothing spécial happening for now, maybe some day if we update the game :)

i um glitched the gam

Reminded me of there is no game

i just lost the game because of you....

Loved it. Short and Sweet.

does anything happen if you give him 1000 fish

cause i dont want to throw my weekend away doing nothing

Sadly no. I know this because I actually tried it a year ago when it was first released :(

hehe i love this game

It'd be awesome if when you gave the robot 1000 fish you find a secret or something!

Idk why I like the music so much :D

I wish the soundtrack was on SoundCloud or something and if it is I'm blind.

Lol I guess i am blind. Thanks!

how do you get your name in?

I managed to actually break the game and run off screen during animal crossing.

this game is amazing and so its music! i enjoyed it a lott

I loved this game, some bugs here and there but otherwise a great game, check out my gameplay i just uploaded, https://www.youtube.com/watch?v=Ay6JO37k2cQ

you can expect more of your games on my channel. :3

I encountered some nasty bugs while trying to play through this game. I literally had to start the whole thing over 2 or 3 different times after getting softlocked at different sections. One time, I threw the NPC at the apple tree at the beginning of the animal crossing section, and then he must have disappeared offscreen somehow (I wasn't paying attention), because after that he was just gone, and throwing the fish all over the place did nothing to help. Another time, when the very first floor spikes appeared towards the end of the game, I was standing right in the path of the spikes, and my character got caught in an infinite death loop, because they kept respawning in the exact same spot that they died, there is no period of invulnerability after respawning, and the amount of time it took to respawn is the exact same amount of time that it took for the next wave of spikes to get to where my character spawns, so my character would die immediately upon respawning, before it could even register any of my inputs.

This is really hard to play with a track pad : )

When I killed one of those black guys in the GTA thing it said I killed rocky rip rocky, he died again

F for Rocky. He lived a short life.

the most exciting game i ever played

Uh... right after I chose which game I'm interested in, I accidentally clicked the top right... trapezoid... thing, and instead of sliding around and bouncing off the walls, I slid right off screen and disappeared. No amount of clicking anywhere got my avatar to reappear. So that was interesting.

Yup every time I choose Animal Crossing first, I end up sliding off screen one way or another. I even threw Bot into oblivion.

Annnnd starting to think the sliding and bouncing around isn't supposed to happen after it happened again when clicking on the electric chair while standing right next to it.

I came from Alpha Beta Gamer on YT. Ngl this game literally amused me. The possibilities and art must be genuinely HARD to finish.

Y'all got my respect.

P.S. The devs are adorable!

This game is AWSOME like dude I love this game dude cause I really like some types of fourth wall breaking like dude idk why I like it so much lol great game :D

Thank you so much for this kind review :D

A red dead easter egg is planned to be added in one of the upcoming updates.

My player just walked off the screen and now I can't get back haha. He was just like 'I've had enough' and bailed.

ahah, sadly I'll fix all the bugs in next updates but yeah it's pretty funny aha

execution is nice and the premise is really cool. However, came across a glitch where in the animal crossing section the npc just disappeared before i could give him a fish. he walked to the left and maybe got trapped behind the water tiles, so I was unable to finish it

On the gta level I clicked walk on the red car (doorish area coming from the right) at the top left and my character drifted straight past it off the screen and got stuck. Can't seem to replicate it but sure was interesting.

Undertale would be goo

What about Pokemon Mystery Dungeon? I want my feels.

There's a typo. At the part where the guy says "Please don't break anything", "anything" is "anythink". 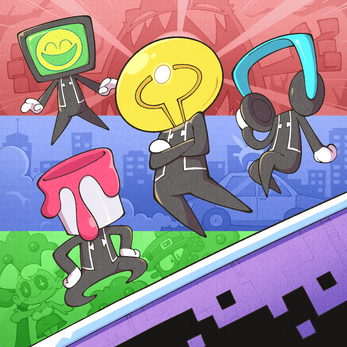